About the Artist, Robert Tino

For nearly twenty years, Robert A. Tino has interpreted the landscape of the Great Smoky Mountains with an eye, palette and brush stroke that meshed realism with impressionism. His signature meshing of transparent watercolors and gouache (pronounced "gwash" - a little used opaque technique) evokes the countless moods of this mountain eden.

In the late 1990's, Robert integrated oils into his portfolio because of the immediate accessibility of blending that allows him to achieve a different kind of softness. Whether the medium is watercolor or oil, Robert preserves his personal experience of the mountains with each scene in remarkable detail, while exploring his characteristic affinity for flourishes of color, depth, and texture.

Since his first limited edition work issued in the early 1980's while still a student at the University of Tennessee, Robert has emerged as one of the most gifted and celebrated artists in the Southeast. Shown in fine art galleries across the South, Robert's work enjoys a devoted following of collectors - one that grows every year with each new release. Many of his earlier works are available only through sales from private collections. Each year Robert releases Limited, Collector's, and Signed Editions of his original paintings from the Robert A. Tino Gallery in the John Denton Home on Sunset View Farm in Sevierville, Tennessee.

"I believe that if it were left to artists to choose their own labels, most would choose none." -Bene Shahn

Abstraction, impressionism, realism... they are all branches of the same river. With the 2002 work, "Things Have Changed", Robert began to follow intriguing turns down river in the journey that he is taking with his collectors. The relationship between the artist and his audience is richer when the artist shares all of himself... the creative influences and passions that catch his eye and his attention. This sharing of the diversity of his work gives his collectors an intimate glance into the studio and the opportunity to see things they would never otherwise see. 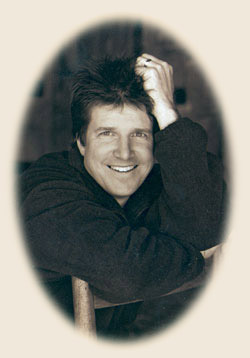 Robert began looking at the ancient hills of the Smokies from a different vantage. He picked up his oils and a painting knife; and after a flurry of fast and broad strokes - when he put the knife down - something new had emerged from the forest. An abstraction with thicker paint, primary reds and blues mixed with muted sage, plum and ochre, less detail, deeper intensity, more vibrancy. And this fellow emerged, too... caught in the middle of the change of seasons in the life of an artist... looking to all the world as if he woke up one spring morning after a long winter's rest, glanced around, and discovered Things Have Changed.

Robert and his wife, Mary John, have chosen to give back to the community, having worked for many years to raise funds for East Tennessee Children's Hospital, St. Mary's Hospital (both in Knoxville), as well as Friends of the Great Smoky Mountains.